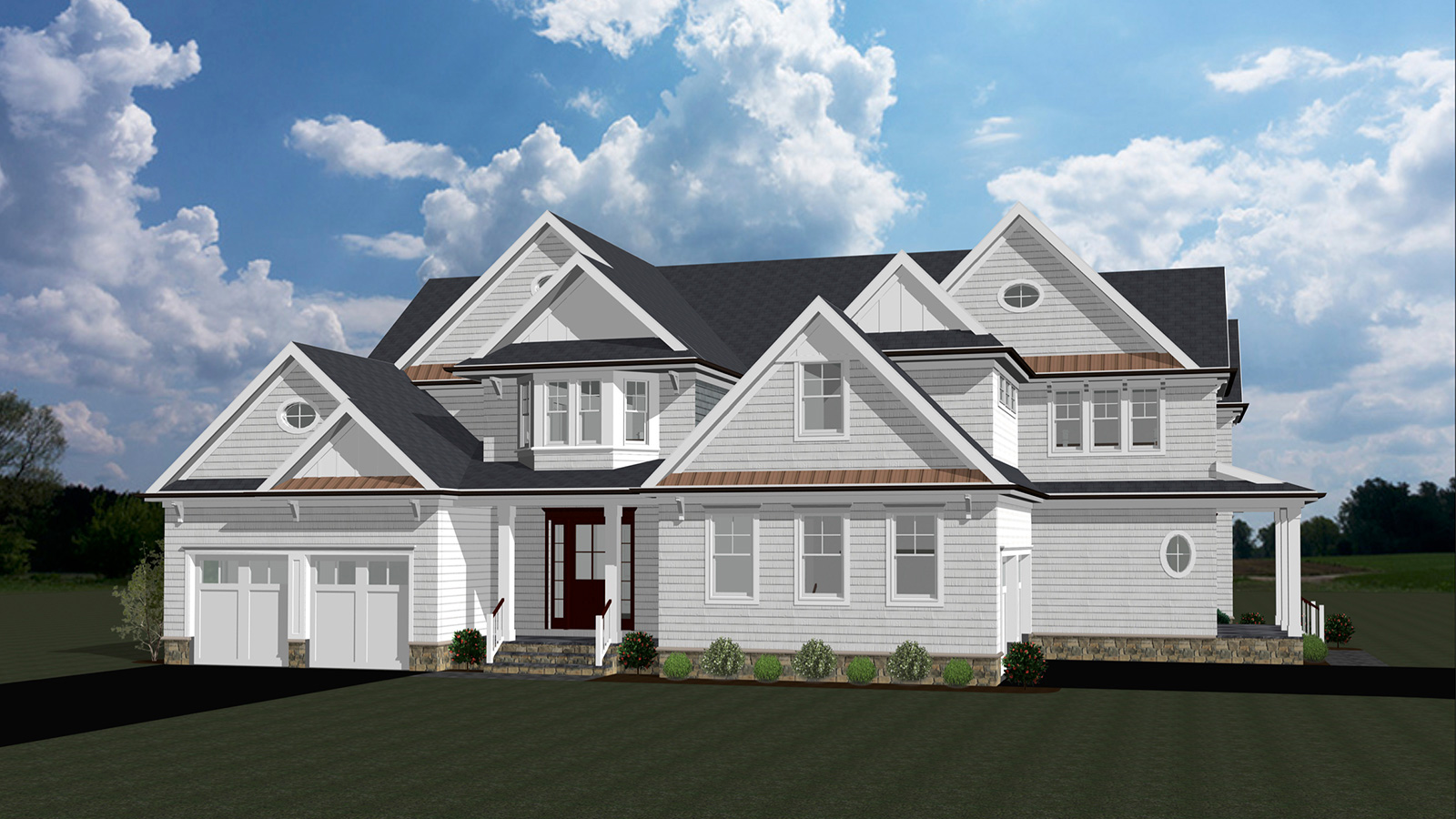 COURTESY YELLOW BROOK
Yellow Brook Property Co. plans to build duplexes like this at 132 Bingham Road in Rumson as part of a settlement agreement between the two parties.

In her decision delivered July 20, Jones said she is satisfied that the settlement agreements reached between Rumson and Fair Share Housing Center (FSHC) and Rumson and Yellow Brook Property Co. LLC “are fair and reasonable and will advance the interests of low-and moderate-income households.”

“Fair Share Housing Center is not the enemy or someone to be disliked or hated. And the way I view it, I think that Yellow Brook is assisting the borough in meeting its obligation,” said Jones.

The borough’s total affordable housing obligation is 603 units, comprised of 29 rehabilitation units, 268 units from the prior Council on Affordable Housing (COAH) round and 335 for the most recent COAH round lasting through 2025. Its realistic development potential (RDP), however, is 51 units. The remaining obligation, an unmet need of 552, will be addressed with inclusionary overlay zoning and additional ordinances. The inclusionary overlay zoning will allow property owners to keep a property as is or, if they choose, to one day develop multifamily housing with affordable set-asides.

There are three project sites proposed in the settlement agreement with Yellow Brook, owned by local developer Roger Mumford, including 132 Bingham Ave., 91 Rumson Road and 62 Carton St. Yellow Brook will construct up to 18 duplex units at the Bingham Avenue site, 3.5 duplexes per acre, and 43 parking spaces. At the Rumson Road site, there will be 16 triplex/carriage house units: 2.75 per acre with 31 parking spaces. There will be no affordable housing set-asides at either site.

Instead, Yellow Brook will donate another property it owns on Carton Street to the borough and will pay $1.45 million to its affordable housing trust fund. Rumson will work with a nonprofit to build a 14-unit, 100 percent affordable project on Carton Street with funds from the trust.

The plans were formally presented to the public at a Jan. 14 borough council meeting which drew a crowd. Hundreds filled the gymnasium at Forrestdale Middle School for a nearly four-and-a-half-hour-long meeting on the borough’s affordable housing plans, presented by borough planner Kendra Lelie. During that meeting Lelie reviewed the two settlement agreements and over 50 residents spoke out strongly against the plans. Many of their objections related to school population concerns, busing, traffic and environmental impacts, open space, taxes, confidentiality and the Rumson Road site being on the National Register of Historic Places, among other objections. Residents repeatedly asked the council not to sign the agreements.

As a result, a group of residents came together to form Rumson Open Space and Affordable Housing (ROSAH), a nonprofit organization with a goal to find alternative solutions for affordable housing in Rumson. The group also hopes to help other towns in New Jersey with similar issues while protecting the environment, open spaces and historic structures, according to the group.

The fairness hearing was handled a bit differently than other hearings it was conducted virtually due to the ongoing COVID-19 pandemic. After having some technical difficulties through the New Jersey eCourts website, the hearings moved to the Zoom application and took three full sessions to complete. Testimony was given by professional planners Kendra Lelie, Frank J. Banisch, Art Bernard and Leah Furey Bruder. The public also had time during the process to voice their opinions and concerns about the settlement agreements. Many spoke, including resident and ROSAH member Allen Berman, who lives adjacent to the 91 Rumson Road property. He said “the people who lose” from this case are Rumson residents and people who live in the neighborhoods where the developments will be constructed.

“For 20 years I’ve lived next door to one house with however many cars that house has and four people. And I value my privacy. Potentially, I’m living next to 31 parking spaces…plus garages,” he said, and potentially 40-plus people. “How that fits in my neighborhood is just beyond me. I feel like the town has done nothing to represent our interests here.”

Resident and ROSAH member Amber Herr called the plans “a disgrace” and “an insult” to the work others have done for affordable housing in New Jersey. She said Mumford’s housing plans will bring “crowded” and “congested” luxury town-homes to Rumson with “very few” affordable housing units. She noted that she joined ROSAH because she is aware that the borough needs affordable housing and wants to see it happen in a different way than is presented.

Jon Blatt, also a resident and ROSAH member, said while he is yet to find a case in which the court did not proceed with settlements presented in fairness hearings, he doesn’t feel the hearings should be “set up with a rubber stamp.”

Citing a prior fairness hearing on affordable hearing in North Jersey, Blatt said, “The purpose of the fairness hearing is not to punt everything to the compliance hearing if fairness, safety and realistic opportunity threshold matters are brought to the attention of the court.”

Mumford told The Two River Times he was very pleased that the judge was “extremely thorough” and that she listened to all of the experts and the public while acknowledging the need for Rumson to have a more diverse housing stock. However, he said in many cases the public did not have a full understanding of affordable housing and development complexities. Others were “hostile” as they spoke to the judge, he said.

“Since the time of the Rumson public meeting Jan. 14 of this year, I’ve remained quiet while being attacked and vilified by some members of the public who didn’t care enough to learn about the process and understand it,” he said. “I’ve always believed that impugning people’s character does nothing to advance solutions.” Mumford added that he believes certain misinformation stemming from the public meeting in January contributed to the personal attacks he has faced over the past several months.

He shared disapproval of the “outrageous statements” made by one resident during the hearing who suggested that people who live in attached housing, or non-single-family homes, have higher rates of catching novel coronavirus. The resident implied that should Mumford build the housing projects, there could be a potential increase in positive diagnoses of the virus.

Mumford said based on the judge’s decision, it’s “obvious” that if the borough went to trial instead of being party to the settlement agreements, it is “highly likely” a court decision would have ended poorly for Rumson. “No town or borough has won a lawsuit with the Fair Share Housing Center involved; Rumson would not be an exception.”

Lastly, Mumford addressed concerns noted by residents in the hearing about the viability of building on the Carton Street and Rumson Road sites. As an “extremely experienced developer,” he said he would not be involved in either site if he was not highly confident they were viable development locations.

Rumson Mayor Joseph Hemphill said now that the Superior Court has approved the Rumson’s settlement agreements, the borough will “continue to follow” the court’s affordable housing process as it moves forward through the compliance plan phase.

ROSAH issued a statement to The Two River Times on the results of the hearing, saying that while the group does not agree “on many levels as to the fairness of the settlement agreements,” it is not its decision to make and it accepts the court’s decision.

With the fairness hearing settled, the process now moves forward to Dec. 1 when the compliance hearing will be held. It is not yet known whether it will be in-person or virtual. In the meantime, the borough will need to adopt several ordinances that will be required to enact the necessary overlay zoning and settlements.

The article originally appeared in the July 30 – August 5, 2020 print edition of The Two River Times.

Courtesy of The Two River Times